"I study the supposed 'Dark Ages,' and within that early time period I research Vikings and 'the Celtic Fringe' -- in other words, I love to work on things that may seem marginal to others. Nothing could be further from the truth, though!

I teach in order to share the endlessly fascinating world of the Vikings and the medieval Irish, and to look for connections between these places and the supposed 'center.' I want to help students learn what studying textual primary sources, material culture, and using experiential learning can teach us about life in the Middle Ages."

Dr. Mary Valante completed her Ph.D. in Medieval History with a minor in Archaeology at Pennsylvania State University. In addition to these specializations, Dr. Valante has studied specific subfields like Roman History, Irish Studies, and a number of languages. When asked about her life outside of her roles as a professor and the History Graduate Student Advisor, Dr. Valante stated: "I work with a team of Middle Schoolers who are building me an army of fighting robots," pictured below. 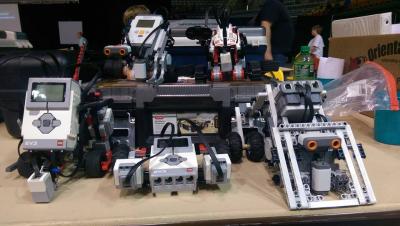 HIS 4100 Digging Up History

HON 3515 Return of the Middle Ages

"Family Relics and Viking Kingship in Ireland," Eolas: The Journal of the American Society of Irish Medieval Studies 6 (2013), 88-106.

"Castrating Monks: Vikings, Slave Trade and the Value of Eunuchs" in Larissa Tracy, Editor, Castration and Culture in the Middle Ages (Woodbridge: Boydell&Brewer, 2013), 174-187.

"Murder in a Viking Town," in B.T. Hudson, Editor, Familia and Household in the Medieval Atlantic Province, (Tempe: Arizona Center for Medieval and Renaissance Studies, 2011), 69-83.

"Taxation, Tolls and Tribute: The Legal Language of Economics and Commerce in Viking-Age Ireland," Proceedings of the Harvard Celtic Colloquium 18 (1998), 242-258.