"I see my classroom as a community of learning, an open space wherein all students can feel comfortable discussing the history and experimenting with the themes and theories presented in class, making mistakes, correcting, and learning from each other."

A historian of Modern China, he specializes in political, social, and intellectual history. He focuses regionally on the southwest borderlands encompassing Sichuan and Yunnan provinces and the Tibetan plateau. Dr. Relyea's research centers on nationalism, state-building, ethnic construction and identity, and the global circulation of ideas embodied in the interaction between empire, state, and nation.

He is currently completing the manuscript for his book, Gazing at the Tibetan Plateau: China's Infrontier and the Early Twentieth Century Evolution of Sino-Tibetan Relations. It explores the critical role played by borderlands and the neighboring 'stable periphery' in the processes of state-building and state consolidation in China's transition from empire to nation-state in the early twentieth century. The book also situates the origins of ongoing Sino-Tibetan tensions in these efforts to transform and incorporate the Kham borderlands of eastern Tibet.

A parallel project, 'Learning to Be Colonial,' traces the intersection of globally circulating ideas of statecraft and colonization with long-standing Chinese imperial frontier policies on novel efforts by local officials to encourage Han settlement of eastern Tibet. He recently began work on a new project, 'Scattering Sand: High-speed rail, nation-building, and China's urban-rural divide in historical perspective.' This research draws on the concept of 'network ghettoes' and Sun Yat-sen's ambitious railway plan (1922) to explore the geographical planning and ramifications of China's high-speed rail network in the context of political, economic, and social forces which have exacerbated the urban-rural divide throughout the past century.

Dr. Relyea cites a quotation from Xunzi 荀子, a third century BCE Confucian philosopher, to convey his approach to teaching:

only through action can a thing be truly learned.'

He continues: In my courses, we learn actively by closely engaging with both textual and visual sources in writing assignments and discussion. I strive to transport my students back to the era we're studying, encouraging them to join me in an investigation of how history unfolds in its time, to actively see history through the eyes of its participants and actors.

I enjoy challenging students to look at the world around them in different ways, to approach moments in history from new and sometimes discordant perspectives, to see the complexities in all aspects of life and the past, and the resonance of the past in the present. The past doesn't necessarily teach us lessons for the present, but shows us where human society, and where different component societies, have come from, and what they've endured in the past. Particularly in the case of Chinese and Asian history, this approach allows students to see that societies on the other side of the world aren't as different (or "inscrutable") as they might have thought.

Between State and Society: Students, Protest, and Social Change in China

Have you eaten? Regional and Ethnic Foods in China and Beyond 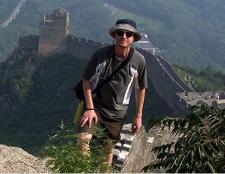