WAR IN EUROPE! Travel to Germany, Czech Republic, Hungary, and Poland to Understand the Consequences of War and Genocide

This interdisciplinary program offered by History and Sociology 6 s. h. of credit studying the causes and consequences of war in Europe. While traveling through the Czech Republic, Germany, Hungary, and Poland students will learn about the impacts of World War II, the Cold War, and the Holocaust through the exploration of various historic sites, museums, and cultural exchanges. Extended excursions included in this trip are: visiting Berlin's "DDR" Cold War Museum, Jewish Holocaust Memorial, and Berlin and Jewish Museum; Krakow's Auschwitz Death Camp; and Budapest's Terror, and the Hospital in the Rock. Click here (DOCX, 99 KB)

Courses Required for All Students:

Students must choose one of the following courses:

In these two courses, we will explore the contemporary legacy of more than a millennium of the influence of Tibetan Buddhism, Tibetan culture and society on Chinese empires and states. We will visit important Buddhist and Tibetan Buddhist monasteries and temples, a Tibetan Medicine Hospital, and sites of Tibetan culture. In the north, we will see the influence of Tibet on imperial China in Bejing's Forbidden City and Yonghegong - the 'Lama Temple.' We will also explore the many temples and monasteries scattered across the five mountaintops of Wutaishan. A famous site of Buddhist pilgrimage past and present, it is also the site of several important Tibetan Buddhist monasteries. In the southwest, we will explore Tibetan monasteries and cultural sites in the capital of Sichuan Province, Chengdu, and along the eastern edge of the Tibetan Plateau, in the old frontier town of Dartsedo, on the Tagong grasslands, and in Jiaju Tibetan Village. In each of these sites, we will investigate the interaction of the two societies today and the resonance of history therein. More generally, we will also study the relationship between an ethnic minority nationality and the majority culture and society of the PRC, the historical foundations for this relationship, and the role tourism plays in the place of the Tibetan culture and Tibetan Buddhism within contemporary Chinese society. Click Here

Beginning in the spring term of 2017, the Center for Judaic, Holocaust, and Peace Studies will offer a new, bi-annual course cross-listed as a class available through the History Department. This upper-level course will involve a spring-break research trip to memorials and research centers in Europe associated with survivors, rescuers, historians, and archivists who deal with the complex history and legacy of the Holocaust.

Course participants will travel to Germany and Poland, including to Auschwitz-Birkenau, Cracow's Jewish quarter, the House of the Wannsee Conference Memorial, Berlin's Jewish Museum and the New Synagogue in Oranienburger Strasse, the Sachsenhausen concentration camp memorial near Berlin, and the Volkswagen factory in Wolfsburg, Germany (home of three former subsidiary concentration camps). The excursion will be financially supported by the Center, fellowships from the Brenner Foundation, and generous donations in a concerted effort to increase the trip's affordability.

Here's a video with information on the Center's research excursions:

WAR IN EUROPE: Fascism in Spain, Germany, and Italy

HIS/SOC 3530 "Fascism, Nationalism, and War in Europe: Interdisciplinary Perspectives"
HIS 3535 "War in Europe and the Rise of Fascism"
SOC 3800 "Sociology of War"

This interdisciplinary program offered by History and Sociology gives students six student credit hours (in History or Sociology, or both) studying the causes and consequences of war in Europe. While traveling through Spain, Germany, and Italy, students will learn about the impact that two world wars, the Spanish civil war, and the rise and fall of fascism had on Europe. Students will read and write on these topics and themes, and then explore various historical sites and museums throughout Europe. Extended excursions included in this trip are: visiting Franco's Madrid, Toledo, Segovia, the Valley of the Fallen, the Prado Museum, Guernica, and Bilbao, Munich (where the Nazi party began), Nuremberg's Nazi Parade Ground museum and the Nuremberg Trial museum, Dachau concentration camp, Hitler's Eagle Nest nestled in the Alps, and finally, the envisioned cities of Mussolini in Venice and Rome.

Students will explore and understand how war, memory, and nationalism led to the invention and spread of fascism during the first half of the twentieth century. Students will also come away with a knowledge of how different societies have dealt with the legacy of war and fascism and how they are remembered differently today in Germany, Italy, and Spain.

Approximately $4,051.73 per student. This covers round-trip airfare to Europe, travel in Spain, Germany, and Italy, lodging, and activity fees.

Appalachia and Wales I and II

Postindustrial Wales exposes students to political, economic and cultural transformations in Welsh Society following the final contraction of heavy industry in the 1980s. The course is organized around a three-week-long program in south Wales. Students will conduct research at Swansea University and the South Wales Miners' Museum. Through these and other activities, the course objective is to encourage students to build career skills and analyze the multi-faceted character of community responses to 'postindustrialism' from a cross-cultural perspective.

Students should develop an understanding of the variation in responses to socioeconomic change through research at Swansea University, meetings with political activists and officials at various levels of government, visitation to cultural events and tourist sites, invited lectures with Welsh scholars, and general interaction in Welsh society.

Approximately $2,913.37 per student. This covers travel in the U.K., lodging, activity fees, and all meals. AIRFARE AND TUITION ARE NOT INCLUDED. Students are responsible for booking their individual flights.

Religious and Ethnic Conflict in Western Europe: Spain and Ireland 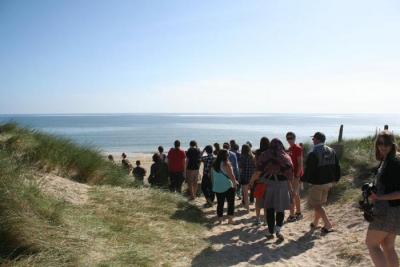 This study abroad program allows students to earn six History and/or Sociology credits at the 3000 level. It introduces students to a comparative historical and sociological examination of religious and ethnic conflict in Ireland, Northern Ireland, and Spain.

Though separated by the Bay of Biscay, Spain and Ireland share many common historical and religious experiences: They are both deeply Catholic nations that have been ripped apart by religious and ethnic conflicts.

In the 20th century they both suffered bloody civil wars and militant terrorist movements. Since joining the European Union and Eurozone both nations have experienced rapid economic growth and development, followed by equally devastating recessions since 2008.